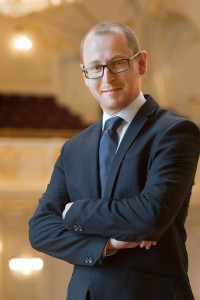 The pinnacle of his career has thus far been the study and preparation of Schoenberg’s Moses and Aaron for the Opera House in Zürich in 2011, with the premiere conducted by the famed conductor Christoph von Dohnányi, as well as preparation of the Slovak Philharmonic Choir for opera productions of Mussorgsky’s Khovanshchina and Berlioz’s The Trojans at the Vienna State Opera. He has also cooperated with BBC Singers. He has conducted Slovak Philharmonic Choir concerts in Hamburg, Bratislava, Žilina and Piešťany.

During the 2018/2019 season he cooperated with the Vienna State Opera, Bruckner Orchester Linz, Royal Opera House Muscat in Oman and the Tonkünstler Orchestra.